I thought I’d take a little break from doing multiple part sermons in small blog segments, and just do a simple message pointing to the coming feast of Pentecost (or first fruits), and our goal of actually becoming first-fruits unto the lamb.

And while the means of reaching that goal may be as varied as the number of people reading this blog, … because we all do have our own personal relationships with the Godhead, I’d like to take a look at a simple statement of fact by one deeply committed man that might be able to provide us with some direction as to how we can achieve the ultimate goal in life of becoming the first fruits of God, and the Lamb.

The man of whom I am speaking is John the Baptist, and it might be a good idea to begin with a reminder of Christ’s evaluation of John in Luke 7, where He said that “among those born of women there is not a greater prophet than John the Baptist” (Luke 7:28). Just think about all the prophets of the Bible. Moses, Elijah, Daniel, Isaiah, Ezekiel … you’d be in pretty good company just to be numbered among them, but Jesus, the Christ of God, says here there is none greater among them than John the Baptist!

In John 3:30, John makes this brief statement that speaks volumes about his personal character and mission in life. In fact, it could rightly be a life mission statement for any of us, brethren. Speaking of Jesus Christ, John simply says, “He must increase, but I must decrease.”

This is a message and an example that you see again and again throughout the New Testament in the lives and words of the called out ones in the early church. Perhaps the greatest examples of actually living this way are found in the writings of the apostle Paul.

Paul expressed this attitude vividly in Philippians 3. As we read this, notice the thought of the decreasing self (all that is important to us in the flesh … our status, our standing in the community, our wealth, that burning, fleshly desire for importance and glory in the eyes of other men) as opposed to the increase of Christ within us.

But what things were gain to me, these I have counted loss for Christ. Yet indeed I also count all things loss for the excellence of the knowledge of Christ Jesus my Lord, for whom I have suffered the loss of all things, and count them as rubbish, that I may gain Christ and be found in Him, not having my own righteousness, which is from the law, but that which is through faith in Christ, the righteousness which is from God by faith; that I may know Him and the power of His resurrection, and the fellowship of His sufferings, being conformed to His death, if, by any means, I may attain to the resurrection from the dead. (Phil. 3:7-11)

You could read through the whole chapter of Matthew 23, and see what Paul’s peers in the Pharisaical community valued in life. That was Paul’s life before he was confronted by Christ on the road to Damascus.

Not that I have already attained, or am already perfected; but I press on, that I may lay hold of that for which Christ Jesus has also laid hold of me. Brethren, I do not count myself to have apprehended; but one thing I do, forgetting those things which are behind and reaching forward to those things which are ahead, I press toward the goal for the prize of the upward call of God in Christ Jesus. Therefore let us, as many as are mature, have this mind; and if in anything you think otherwise, God will reveal even this to you. (Phil 3:12-15)

Colossians 2:6-9 talks about walking in Christ Jesus, in whom “dwells all the fullness of the Godhead bodily.” This word “fullness” is pieroma (G 4138), which means just what it says – a filling up and being full. In verse 10, we are told that we are “are complete in Him,” and the word here is pieroo (G4137), which is the root word for pieroma. It means to fill as a net with fish, to fill up, supply fully, accomplish, perform fully. Once again, we see this sentiment expressed – that Christ, in us must increase until He is fully formed in us. 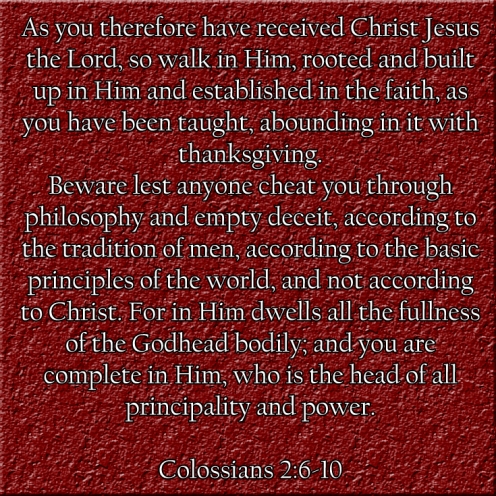 What is the end product of the “He must increase, but I must decrease” mentality?

But to each one of us grace was given according to the measure of Christ’s gift. Therefore He says: “When He ascended on high, He led captivity captive, and gave gifts to men.” (Now this, “He ascended”—what does it mean but that He also first descended into the lower parts of the earth? He who descended is also the One who ascended far above all the heavens, that He might fill all things.)

And He Himself gave some to be apostles, some prophets, some evangelists, and some pastors and teachers, for the equipping of the saints for the work of ministry, for the edifying of the body of Christ, till we all come to the unity of the faith and of the knowledge of the Son of God, to a perfect man, to the measure of the stature of the fullness of Christ; that we should no longer be children, tossed to and fro and carried about with every wind of doctrine, by the trickery of men, in the cunning craftiness of deceitful plotting, but, speaking the truth in love, may grow up in all things into Him who is the head—Christ (Eph. 4:7-15)

In verse 10 … this word “fill” is also the same Greek word, pieroo, that was translated “complete” in Col. 2:10. So, it’s a part of Christ’s job in the church to fill us up and to complete us. Then reading on, we see all of these functions in the church are given so that the entire body might achieve the goals of edification and perfection.

Brethren, in each of our lives, for the rest of our lives, we would all do well to commit ourselves to the attitude and aspiration in life that was voiced so long ago by a man that Christ described as “the greatest prophet born of women” and by the apostle Paul, who fully lived the words that John spoke when he uttered that exemplary phrase, “He must increase, but I must decrease.”