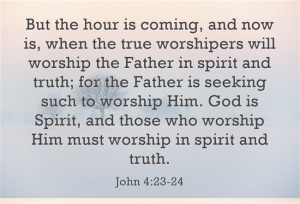 No matter how much we might desire to be a part of, and contribute to a “church fellowship,” or body of believers, we all have personal responsibilities assigned to us by God Himself as individuals. If our church culture and tradition is getting in the way of our responsibility to worship the Father and His Son properly, then it’s time to take a good, hard look at our traditions.

In Spirit and In Truth

The “One Sent,” Jesus, The Christ of God had an interesting exchange with a Gentile woman at Jacob’s well near the Samarian city of Sychar. It is interesting to note that just in speaking with her, Christ was parting with an established tradition of the Jews

A woman of Samaria came to draw water. Jesus said to her, “Give Me a drink.” For His disciples had gone away into the city to buy food. Then the woman of Samaria said to Him, “How is it that You, being a Jew, ask a drink from me, a Samaritan woman?” For Jews have no dealings with Samaritans. (John 4:7-9)

Though it was not traditional for Jesus, a Jewish man, to speak with a Gentile woman, the two had a very revealing exchange about a spiritual type of “water” that Christ was sent to this earth to give to all of humanity. This conversation culminated in Christ revealing Himself to her as the true Messiah, and telling her what His Father in heaven required of those who desired to worship Him.

The woman said to Him, “Sir, I perceive that You are a prophet. Our fathers worshiped on this mountain, and you Jews say that in Jerusalem is the place where one ought to worship.”

Jesus said to her, “Woman, believe Me, the hour is coming when you will neither on this mountain, nor in Jerusalem, worship the Father. You worship what you do not know; we know what we worship, for salvation is of the Jews.” (John 4:19-22)

In verse  20, she speaks of traditions of worship established by the two cultures regarding the “place” where one should worship. It was a very important subject for both groups at the time, but Christ told her that neither tradition would endure in the times that would come. Then, in verse 22, He speaks of a deeper issue that revealed which culture was actually worshiping the true God, His Father in heaven, and in this case it was the Jews who were doing it more correctly. Why? Because they knew who the true God was, and that He was the Creator of the entire universe as He had revealed Himself in scripture. The Samaritans worshiped Him as one of many local deities, in this case, they saw Him as the “God” of the land, this mountain, Jacob’s well.

Verse 23 is key. Jesus says the hour has now come for true worshipers to worship in spirit and truth because He, the Messiah, is here! The Greek word translated “true” is  alethinos (G228). It means real, genuine, not fictitious. True worshipers are always striving to refine their worship of God that it might be more pleasing to Him — not to themselves, nor to other men, organizations, cultures, or established traditions, and societal norms.

So the genuine “worshipers” — the word, proskunetes (G4353), means an adorer — are always refining their worship. Their adoration of the Father is becoming more and more pleasing to Him in spirit and in truth. Spirit is from pneuma (G4151), a Greek word most are fairly familiar with, and “truth” is a different form of alethinos. This word, alethia (G225), means, “The unveiled reality lying at the basis of, and agreeing with an appearance … truth, as evidenced in relation to facts” (Zodhiates).

In Acts 10:1-35,  Peter was told that he had to “move on” from a tradition he had believed was rooted in truth when God “unveiled reality” in the truth that “God shows no partiality.” The idea that Jews, “God’s people,” shouldn’t have anything to do with Gentiles was shown to be a fable in facts presented to Peter in a vision direct from God, and in reality, through the obvious conversion of Cornelius.

Then he said to them, “You know how unlawful it is for a Jewish man to keep company with or go to one of another nation. But God has shown me that I should not call any man common or unclean. Therefore I came without objection as soon as I was sent for. I ask, then, for what reason have you sent for me?” … Then Peter opened his mouth and said: “In truth I perceive that God shows no partiality. But in every nation whoever fears Him and works righteousness is accepted by Him.” (Acts 10:28-29, 34-35)

When the “Holy Spirit fell upon all those Gentiles “who heard the word,” Peter could not deny this proof of God’s calling and they were baptized (Acts 10:44-48). Even so, it was apparently hard for Peter to move on from Jewish tradition, as evidenced in Galatians 2:11-14 when he had to be sternly rebuked by Paul for separating himself from Gentile converts. But in order to worship in spirit and truth, Peter corrected himself and moved on. 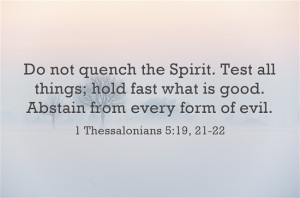 So it must be with all of us, if we consider ourselves to be “true worshipers.” We must be willing to examine our culture, our traditions, and our practices, just as Peter was forced to do, and discard what we cannot reconcile with the Word of God.

1 Thessalonians 5:21 admonishes us, “Test all things; hold fast what is good.” By implication, we should also let go of that which is not good. As Christians, we must constantly “grow in the grace and knowledge of our Lord and Savior Jesus Christ” (2 Pet. 3:18). Dare we think that we will never be required to change even some of our most closely held traditions, even if it may be painful at times, to become “true worshipers” worshiping “in spirit and truth”?

But we all, with unveiled face, beholding as in a mirror the glory of the Lord, are being transformed into the same image from glory to glory, just as by the Spirit of the Lord. (2 Cor. 3:18)

We are being transformed to look and act exactly like Jesus Christ. Whatever we’ve been doing that does not conform to that glory is going to be left behind, and is worthy of being left behind. To worship the Father in spirit and truth, we must learn to move on.